In the ongoing 12th edition of the Indian Premier League (IPL) 2019, Kolkata Knight Riders (KKR) on Friday continued their winning momentum by defeating Kings XI Punjab (KXIP) by seven wickets at the PCA stadium in Mohali and kept their playoff hopes alive. The win might make the KKR squad happy but all was not good during the first innings when KXIP were batting.

Skipper Karthik – who is known to keep his calm even during high-pressure situations – was seen lashing out at his teammates during the first strategic time-out in the KXIP innings.

Head coach Jacques Kallis was also present on the field when Karthik called his teammates into a huddle and expressed his displeasure about something. After the end of the match, Karthik revealed that he wasn’t happy with the bowlers and fielders and that is why he lost his cool in the middle. 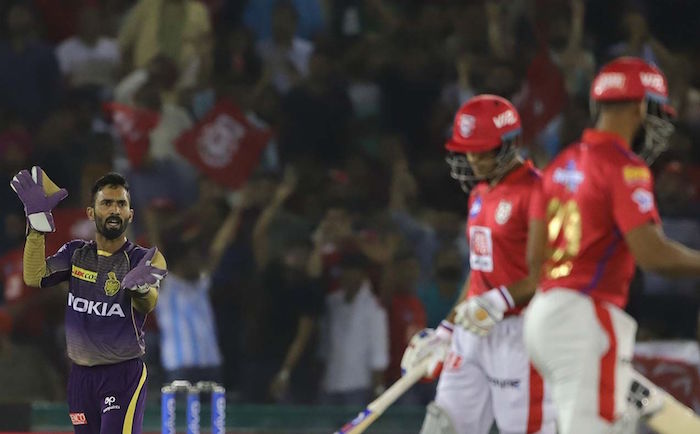 “We live to fight another day. It’s been a hard few days. I wasn’t too happy with what the bowlers and the fielders were doing, so I thought I should let the boys know what I felt at that time. It is rare, not many people have seen me angry. If I feel I need to be angry to get the best out of the boys, then maybe. The last over went for 10 runs too many, but we have to give it to Sam Curran,” said Karthik in the post-match presentation.

“IPL is that kind of a tournament where someone comes in and scores run for you, so there’s that balance. It’s a big ground, but we did the small things well. Ran well, put pressure on the bowler, and good execution on the batsmen. It’s fair that we have given Gill a chance at the top of the order, and he has grabbed the opportunity with both hands,” the KKR captain added.

Batting first, KXIP scored 182-6 in 20 overs after a sensational 24-ball unbeaten 55 by all-rounder Sam Curran. However, opening the innings for KKR, Gill scored his second consecutive half-century as he helped the Kolkata outfit chase down the target with two overs to spare.

KKR will next compete with Mumbai Indians (MI) at the Wankhede stadium on Sunday as their bid to qualify for the playoffs continue.