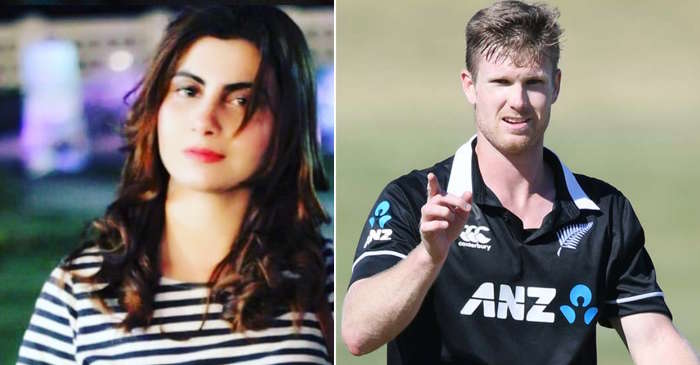 New Zealand all-rounder James Neesham, also known as Jimmy Neesham, is one of the most followed cricketers across the world as far as social media is concerned.

He was an image of heartbreak when the Black Caps came up short against England in the 2019 ICC Cricket World Cup final at Lord’s on July 14. The left-hander had scored 14 runs out of the 16 needed for his team in the Super Over, which ended up in a tie and England became first-time world champions.

Neesham, who is well known for his witty replies and sense of humor, doesn’t shy away from trolling or responding to trolls on social media.

Recently, Jimmy entertained everyone with his antics on Twitter, as he received a proposition of love from a Pakistani TV actress Sehar Shinwari.

Shinwari, who currently works in Pashto channel Avt Khyber, took to Twitter to send a flirty proposition to the New Zealander. She asked Jimmy to be the father of her future kids, with some emojis.

Neesham was quick to understand the sarcasm associated with the tweet and came up with a reply for the same.

The 28-year-old Auckland born cricketer took no time in understanding that the Pakistani actress was speaking in jest and decided to reply in the same vein. He wittily remarked that Shinwari could have done much better by not adding the emojis at the end.

“I really feel like the emojis were unnecessary,” Neesham replied.

It shows how quickly Jimmy knows to come up with an answer, which is funny and hilarious.