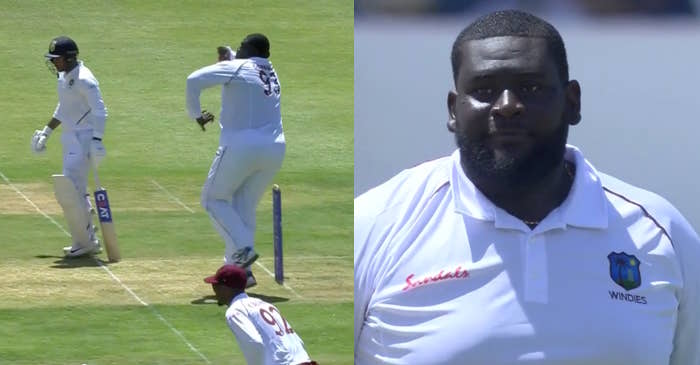 After years of hard work in the West Indies domestic circuit, plenty of age-group cricket and several ‘A’ tours later, Rahkeem Cornwall has finally got a chance to grace the international circuit.

On Friday, Cornwall received his Test cap from former West Indies pacer Corey Collymore as he was included in the playing eleven for the second Test against India at Sabina Park in Kingston, Jamaica. Speaking at the toss, Windies skipper Jason Holder announced that the ‘mountain man’ Rahkeem Cornwall will make his debut for the side, along with Jahmar Hamilton.

Cornwall, who stands at 6 ft 5 inch and weighs around 140 kilos became the heaviest cricketer to play Test cricket. The bowling-allrounder surpassed former Australia captain Warwick Armstrong, who weighed 133-139 kg, to achieve the feat.

The off-spinning all-rounder did not play in the first Test in Antigua when the hosts were crushed by Team India inside four days.

But his debut match, Cornwall was involved in both Indian wickets to fall in the first session of play as India notched 72 runs for the loss of two wickets in 30 overs.

Opener KL Rahul was caught by Cornwall at first slip for 13 after he edged a Jason Holder delivery. Soon after, Cornwall claimed his first international wicket when the spinner had Cheteshwar Pujara caught at point for six.