Dhawan, who enacted a scene from the Akshay Kumar starrer movie, was promptly reminded by Bhuvi that the southpaw did not need to act about forgetting things.

The Delhi lad was recreating a scene from ‘Housefull 4’ along with India bowlers Khaleel Ahmed and Yuzvendra Chahal in which he forgets things as soon as the latter makes a sound.

Dhawan shared the video on his social media accounts with the caption “Bala ke side effects.”

Bhuvneshwar came up with a cheeky comment to the video, “Bhulne k acting k kya zarurt wo to natural talent hai,” he wrote.

It is to be noted that Dhawan is known for forgetting things, sometimes even whereabouts of his kitbag. Bhuvneshwar, who is not a part of the current India squad that is playing a three-match series against Bangladesh, decided to point out Dhawan’s forgetful nature after watching the video. 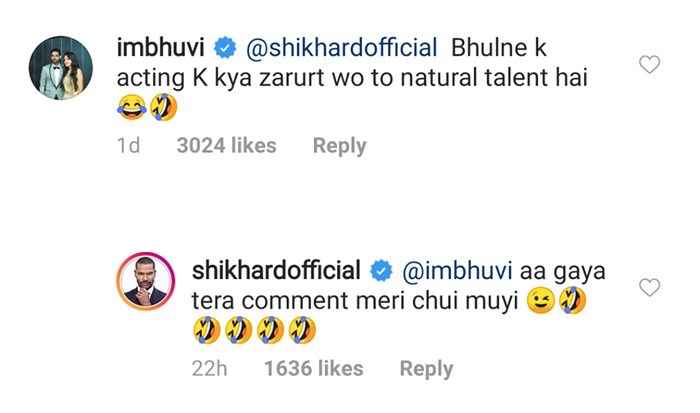 The 33-year-old opener is struggling at the moment to convert the good starts into big scores. In the first T20I, Dhawan scored 41 runs before he got run-out, whereas, in the Rajkot T20I, he got clean bowled at a score of 31 on a straight delivery bowled by Aminul Islam.

The third and final T20I is scheduled to take place in Nagpur at Vidarbha Cricket Association Stadium on November 10.