On the opening day of the Boxing Day Test against New Zealand, former Australia captain Steve Smith got involved in a heated argument with umpire Nigel Llong as he left the MCG field at lunch in a debate over cricket’s dead-ball rule.

Australia were denied leg byes twice in an over before lunch when Smith was struck on the body by New Zealand pacer Neil Wagner, before taking off for a run.

In both instances, Smith faced a short ball from the left-arm quick, which struck him high on the body before trickling behind the wicket.

Umpire Llong both times ruled that Smith had left the ball and let it strike him rather than “try and avoid being hit” in an absorbing first session where Australia lost two wickets for 67. 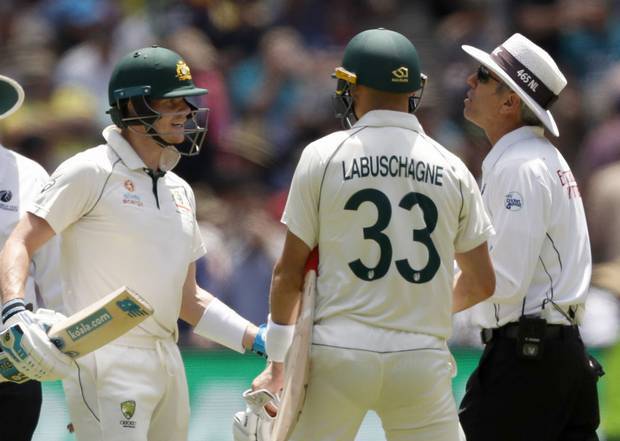 Warne, who was fulfilling the commentator’s responsibility for the match, put forward his views on the incident. “Well, the umpire’s wrong. Steve Smith has every right to be angry because the interpretation Nigel Llong is giving at the minute is incorrect,” Warne said on Fox Cricket.

Here’s what the ICC rulebook says when it comes to leg byes:

If a ball delivered by the bowler first strikes the batsman, runs shall be scored only if the umpire is satisfied that the striker has either attempted to play the ball with the bat or tried to avoid being hit by the ball.

Warne also got into the technicalities and explained why Smith had every right to rotate the strike after being hit on the body.

“The rule is if you evade a short ball and it hits any part of your body you’re allowed to run even if you don’t play a shot. I’m sure someone’s going to have a chat with Nigel Llong in the lunch break because Steve Smith’s livid and rightly so,” he added.

After the early hiccups, Smith stabilized his innings to put Australia back on track. The hosts ended the day’s play with 257 runs on the board at the loss of wickets. Smith was unbeaten on 77 along with Travis Head on 25 at the other end.