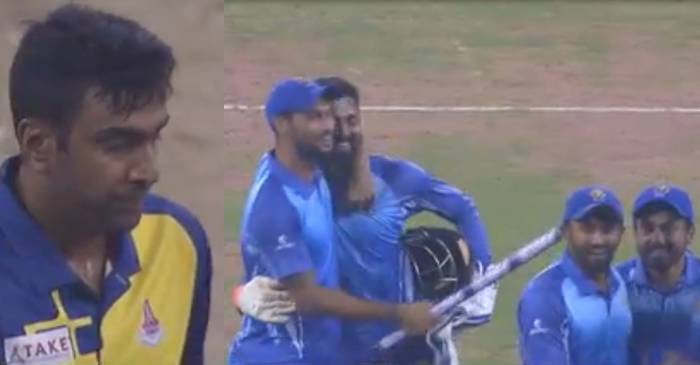 Karnataka, on Sunday, showed pure dominance in the Syed Mushtaq Ali Trophy 2019 final to clinch an exiguous one-run win over Tamil Nadu. Karnataka successfully defended the title that they won against the same opposition last year.

Earlier in the match, Dinesh Karthik-led Tamil Nadu won the toss and asked their neighbors to bat first.

Under the lights of KL Rahul and Devdutt Padikkal, Karnataka made a solid start. Rahul showed his aggression as he took the attack on Ravichandran Ashwin taking him for two boundaries in two overs.

Rahul didn’t stop there as he connected a six in the third over of Ashwin, but the off-spinner with all his international experience had the last laugh. Ashwin dismissed Rahul, who was trying again to whack him over long-on.

Tamil Nadu’s frontline spinner followed the momentum by sending Mayank Agarwal in the pavilion for a first-ball duck.

Karnataka was in trouble as they lost their two wickets for 39, but then came the counter-attack produced by the skipper Manish Pandey along with the highest run-scorer in the tournament; Padikkal.

The duo missed out to make 50 runs stand as Washington Sundar knocked over Padikkal’s stump with a beauty in the 10th over of the innings. However, this didn’t stop the carnage as the middle-order batsman Rohan Kadam added a 65-run stand with his captain Pandey, who scored his second half-century in the tournament.

Tamil Nadu, on the other hand, did control things as they conceded just 34 runs in the last four overs courtesy of the excellent bowling by T Natrajan, who gave only 14 runs from 2 overs. Pandey remained unbeaten on 60 from 45 balls while Karun Nair contributed well with 17 off eight deliveries and took the team’s total to 180.

Chasing the target of 181, Tamil Nadu also reached a similar stage of Karnataka as they lost their two wickets at only 37 runs.

Captain Dinesh Karthik and all-rounder Washington Sundar with their collective efforts added a 39-run stand, but that followed a Krishnappa Gowtham’s ripper, which destroyed Sundar’s defense and Rahul’s stumping to remove Karthik.

Tamil Nadu went into deep trouble when they lost their four wickets at a score of 80. Then, Baba Aparajit and Vijay Shankar took the responsibility and added 71 runs in less than seven overs before Ronit More got Aparajit out in the deep.

Shankar, on the other hand, didn’t lose concentration and continued his efforts to ensure his team to team to register the victory; however, he failed to do so as in an attempt to take a double in the second last delivery of the innings got run out.