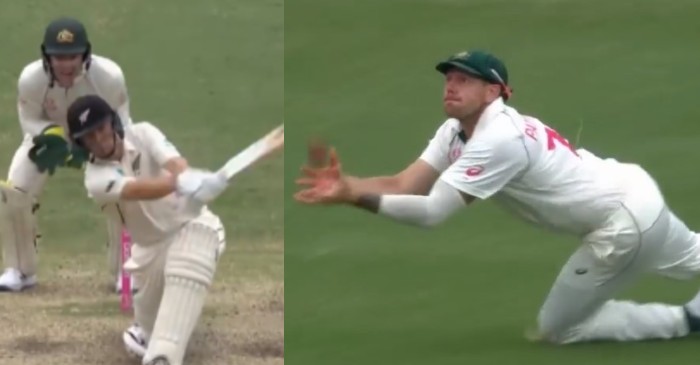 On Monday, Australia’s speedster James Pattinson exhibited his tremendous fielding skills against New Zealand in the third Test at Sydney. Pattison stunned everyone by pulling off a screamer to dismiss Kiwi batsman Todd Astle.

During the 46th over of New Zealand’s second innings, Nathan Lyon bowled a wide delivery outside off-stump, Astle sneaked an opportunity to score big runs as he played a slog sweep. However, the shot didn’t connect, and the top edge went to the mid-wicket region. Pattinson, who was positioned at mid-off charged towards the ball and took a one-hand stunner.

The outstanding effort pumped up the commentators as well. They were heard shouting, “What a catch! James Pattinson has taken one of the greatest catches at the SCG.”

“JIMMY PATTINSON! Is that the catch of the summer? #AUSvNZ,” tweeted Cricket Australia.

Meanwhile, Lyon finished with 10-wickets as Australia showcased their pure dominance by crushing New Zealand with a 279-run victory. After declaring on 217, the hosts managed to fold up the Kiwis on 136 and won the series 3-0.