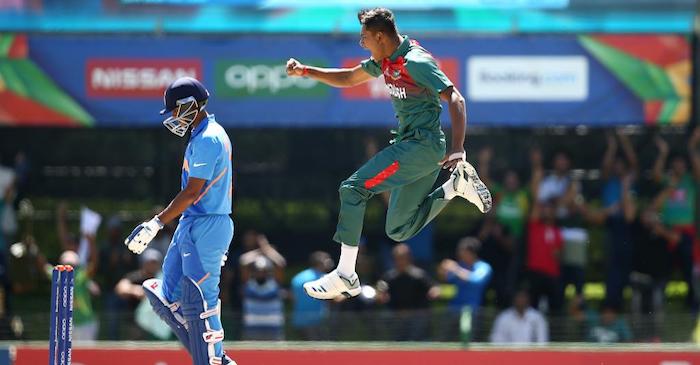 The two best teams of U19 World Cup (WC) 2020; India and Bangladesh met each other in the much-anticipated final showdown to see who will lift the coveted trophy. The first-timers outran the defending champions with ease and captured their maiden title in the prestigious ICC event.

The ‘Tigers’ completely outplayed India in the final encounter. After bundling out their neighbors on 177, Bangladesh began to chase the low total. They started pretty well and reached 50 without any loss. It looked like that the ‘Boys in Green’ would quickly get to the set target, but a twist in the story was waiting to greet them.

India’s star spinner Ravi Bishnoi dismantled the top order of Akbar Ali-led side, and from 50-0, they were all of a sudden on 65-4. Just a few runs later, left-arm pacer Sushant Mishra too, joined the party to take a couple, which brought Bangladesh to 102-6.

They are the joint fourth-best figures recorded in an U19 World Cup final.#U19CWC | #INDvBAN | #FutureStars pic.twitter.com/djSnlZNtwa

Opener Parvez Hossain, who got retired-hurt during the innings, came back and held one end firmly to ease off the pressure. Skipper Ali, too, showed maturity and kept on tickling the scoreboard. However, Parvez (47 off 79) did lose his momentum and gave his key wicket to part-timer Yashasvi Jaiswal.

Indian bowlers did show fight, but it was just a bivouac which eventually extirpated by Bangladesh as they won the contest and clinched their first-ever U19 WC title.

BANGLADESH HAVE WON THE ICC U19 WORLD CUP FOR THE FIRST TIME IN THEIR HISTORY!!!!!#U19CWC | #INDvBAN | #FutureStars

Earlier, India posted 177 in 47.2 overs. Their batting looked weak and frightened in front of Bangladesh’s bowler as they succumbed against disciplined bowling. Indian batting unit fell like a pack of cards. Their last seven batsmen added only 21 runs. Opener Jaiswal, however, showed his outstanding class and scored the maximum 88 runs for his team.

Here are the U-19 World Cup Winners of each season: