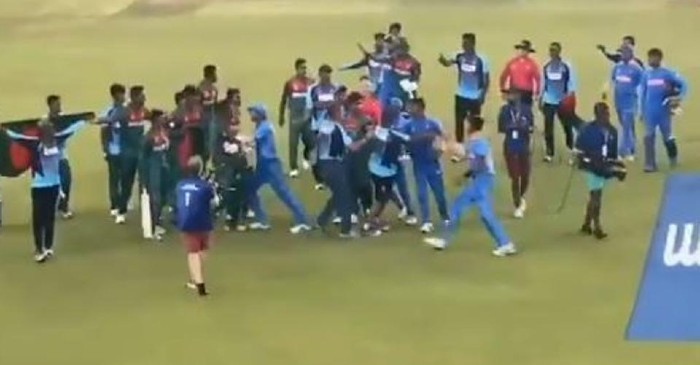 The manager of the U19 Indian team, Anil Patel, expressed his shock for the incident which occurred in the final few minutes of the match. Players from both Bangladesh and India engaged in a scuffle post the conclusion of the match.

Patel claimed that ICC is going to take the matter seriously and investigate the match footage, giving their judgment on Monday. The incident came in the aftermath of Bangladesh’s first-ever ICC World Cup title win in their cricketing history.

They beat favorites and defending champions, India, by a margin of three wickets. The ecstatic Bangladeshi squad could not contain their excitement and were involved in a verbal spat with the Indian players, immediately after the win.

What unfolded next was undoubtedly outside the spirit of the game as footage revealed physical scuffle between players from either side.

The match was played in a heated environment right from the start, with players from either team giving unruly sendoffs to batsmen after dismissing them.

Also, one of the Bangladeshi bowlers, returned a dangerous-looking throw, aimed at the head of batsmen Jalaj Saxena, after the latter defended the ball back to the bowler.

“The referee came to me. He was sorry about the incident. He clarified the ICC is going to take very seriously what has happened during the match and the last session and they are going to witness the footage and they will tell us in the morning [on the next step],” stated the manager of the Indian team.