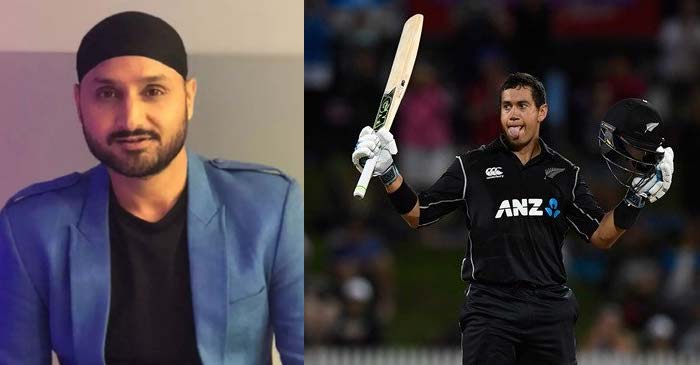 New Zealand defeated India by four wickets in the first ODI of the three-match series at Seddon Park on Wednesday, finishing the high-scoring match at four for 348.

Ross Taylor smashed 109 not out off 84 balls, and he was ably supported by Henry Nicholls (78 off 82 balls) and Tom Latham (69 off 48 balls) as the hosts crossed the finishing line with 11 balls to spare.

Like always, Taylor pulled off his trademark ‘tongue poking’ celebration after completing his hundred. And veteran India off-spinner Harbhajan Singh didn’t leave a chance to take a dig at Taylor’s cheeky celebration.

“What a knock @RossLTaylor well done. Tell me why do u put the tongue out every time score 100. Good game of cricket,” Harbhajan tweeted.

Well, it wasn’t the first time that Taylor featured in New Zealand’s one of the biggest ODI chases. Taylor has starred in all the four biggest chases for the Kiwis and has also scored three hundreds in them. Moreover, since 2014, Taylor has scored a century on five occasions in successful chases batting at No. 4 or lower. And here’s why Taylor is regarded as one of the finest in ODIs because no other batsman has even scored more than 2 tons in successful chases at those positions in this duration.

Most 100s batting at No.4 position in ODIs