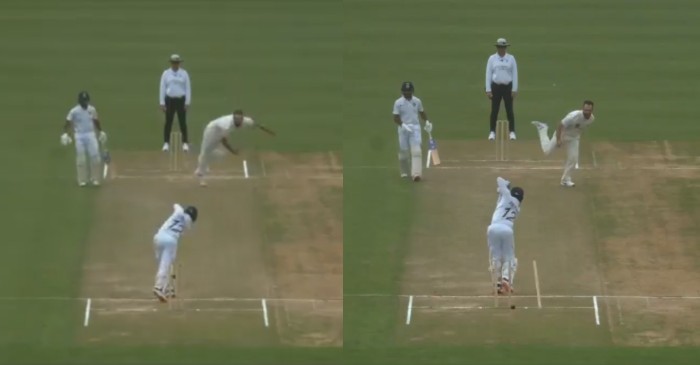 In the recently concluded warm-up game between India and New Zealand XI at Seddon Park in Hamilton, Prithvi Shaw had a couple of forgettable outings.

After getting dismissed without opening his account in the first innings, Shaw lost his middle stump to all-rounder Daryll Mitchell, while playing an expansive drive through the on-side, in the second innings.

The Mumbai-opener looked to continue his template of counter-attacking stroke play through his breezy knock of 39 off just 31 deliveries, with six scorching boundaries.

However, he looked to play one shot too many times and gave his wicket to Mitchell, who terrorized the Indian batting order with three wickets in the second innings.

The Black Caps Twitter handle uploaded the video of Mitchell sending Shaw’s middle stump flying across towards the slips.

After a racy start, the Indian team lost both Gill and Shaw in quick succession to Mitchell. Gill was adjudged leg-before to a delivery from the Northern District cricketer.

It was only due to the counter-attacking partnership between Rishabh Pant (70) and Mayank Agarwal (81 retired), which consolidated the situation for the visitors.

The three-day match ended in a draw with Wriddhiman Saha and Ravichandran Ashwin holding fort, and India at 252 for the loss of four wickets.