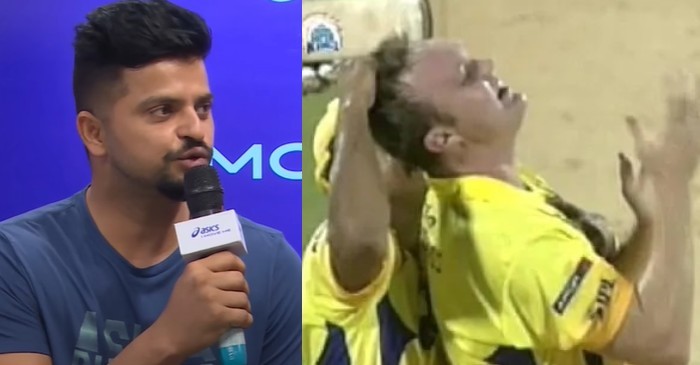 In cricket, whenever a batsman gets out, bowlers along with fielders are often seen celebrating the moment. During which, fielders tend to give high-five, pat on the back and at some occasions they even rub bowlers’ head. However, sometimes these kinds of celebrations turn into an embarrassing episode, especially when the bowler has gone through a hair transplant.

A similar experience happened with former Australia speedster Doug Bollinger in 2010, when he was playing a match in the Indian Premier League (IPL) representing Chennai Super Kings (CSK). The awkward moment came when during a celebration Indian fielder Suresh Raina ruffled his hair.

After so many years since the incident, Raina has recalled that moment when Bollinger got pretty angry at him. While interacting with Sportscreen, Raina had no idea about the real situation.

It all happened when CSK was taking on the challenge of Kolkata Knight Riders (KKR), and Bollinger got the wicket of the then KKR skipper Sourav Ganguly. It was a vital wicket for MS Dhoni-led side, and Raina went up to Bollinger to celebrate but ended pulling his hair that came off his head.

“I still remember the Doug Bollinger incident (He was famous for his hair transplant then). I was actually scared. When he bowled to Dada in a Chennai game in IPL 2010 season, he picked his wicket LBW, I went towards him to celebrate the wicket, and while celebrating, I tried to pull his hair off, that’s when the whole thing completely came off,” said Raina.

The 33-year-old stated that the Aussie paceman was extremely angry at him as he had removed Bollinger’s wig in a stadium full of spectators.

“Bollinger was like, ‘you can’t touch my hair, you don’t know much effort I put into it’. After that incident, whenever he took a wicket, I used to celebrate by a certain distance with just hand gestures,” the Chinna Thala added.

The 2010 IPL was the third season of the lucrative league won by CSK for the first time. They defeated Mumbai Indians (MI) in the final at DY Patil Stadium. Batting first CSK posted 168/5 on the scoreboard, thanks to Raina who played an unbeaten 35-ball 57 run innings.

In response, the Sachin Tendulkar-led side could only reach 146/9 and lost the contest by 22 runs. Raina was declared ‘Player of the Match’ while Tendulkar with 618 runs in the season grabbed the ‘Player of the Series’ award.