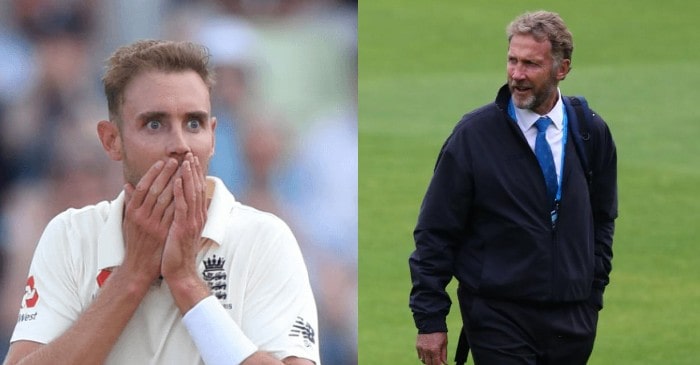 In an ebullient episode, England seamer Stuart Broad received a penalty by his own father and match referee Chris Broad for giving a send-off to Pakistan’s leg-spinner Yasir Shah in the three-match Test series opener at Old Trafford in Manchester.

Broad was spotted using inappropriate language after dismissing Yasir during Pakistan’s second innings. The leggie had played an attacking knock in the morning session of Day 4 as he smashed a quickfire 34 runs off 24 balls before Broad sent him back to the pavilion. Yasir slammed five fours and a six to help his side set a 277-run target for England to win the Test.

However, Broad’s reaction after taking the wicket of Yasir didn’t go well with Chris as the latter fined his son 15 per cent of the match fee and also handed a demerit point for such an action.

Later, Broad, who recently joined the 500 Test wickets club, came up with a hilarious tweet for his father.

It all happened when England Cricket fans’ group ‘Barmy Army’ took to Twitter and wrote,” Stuart Broad fined and given a demerit point by his dad, match referee Chris Broad! Looks like we might need to change the words to his song slightly.”

The 34-year-old pacer came out with a side-splitting response stating that his father is now off the Christmas and present list.

Earlier, Broad admitted the wrongdoing and acknowledged the sanction proposed by his father. After which no formal hearing was conducted. On-field umpires Richard Kettleborough and Richard Illingworth, along with third umpire Michael Gough and fourth official Steve O’Shaughnessy levelled the charge.