Not very long ago did England’s star cricketer Sarah Taylor posted a naked picture on her Instagram to raise awareness about women’s health. She had posed for the magazine called Women’s Health UK.

Once again the English women’s wicketkeeper posted a topless picture on Sunday and shared yet another snap. Her England teammate, Alex Hartley hilariously trolled Sarah by putting up a funny comment on the picture.

Earlier, Sarah had spoken about women’s health and urged them to embrace themselves the way they are. The picture back then drew a lot of criticism but a few of them even praised the same for shedding her inhibitions.

In the recent snap, Sarah was seen holding the bat with her gloves on. She also had a few motivational words to go along with the picture.

The 30-year-old old this time captioned the photo: “Waiting to go into bat like.” 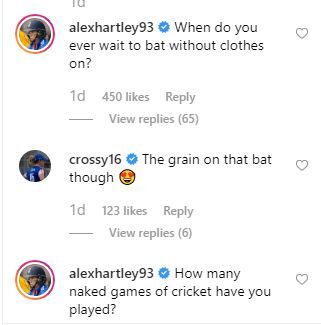 Meanwhile, Sarah is currently plying her trade for the Surrey Stars in Women’s Cricket Super League (also known as Kia Super League) and is having a good time with the bat. So far she has clunned 225 runs from six matches with a stunning average of 45.